I get caught up in my own stuff sometimes. Maybe we all do—gosh, I hope it isn’t just me! Anyway, that’s what happened in March.

By March, winter had taken its toll on the landscape, and on my spirit. It was worse than usual. If bone-cold weather, gray skies, and shades of brown weren’t enough to dampen my mood, Kentucky’s unprecedented ice storms brought magnificent trees to their knees. Although clean-up was well underway by March, the skyline remained changed—jagged—like something Tim Burton dreamed up. 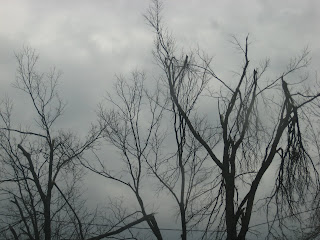 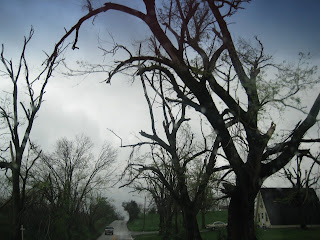 It really bothered me. Everything bothered me. Little things that I normally wouldn’t have allowed to get under my skin, burrowed deep, grew thorns, and created sore spots. What kinds of little things?

Well, for starters I was suffering from a little too much togetherness. You know those families who do everything together, even the grocery shopping? Yeah, well, my family and I aren’t like those people. Everyone in my family needs togetherness AND aloneness. But since we’re building a house, my husband, my twelve-year-old daughter, myself and two dogs, had been stuck together in a small rental home all winter. This hadn’t been a problem when we’d moved into the house back in June, because we’re all outdoor people. But when the weather turned, and we couldn’t be outside, well, that’s when the walls began closing in—I’m pretty sure we’re living in about nine square feet of space.

In addition, it began to look like the second middle-grade novel I’d written and had had high hopes for, wasn’t, in fact, publishable.

Naturally, this caused me to assume that the other novel I’d been working on—after the un-publishable one—was also completely un-publishable. Yep, I’d lost it—and by “it” I am, of course, referring to any teensy little bit of writing talent or skill I’d ever had. I wasn’t really a writer after all! Something to Sing About had been a total fluke and I would never be published again! Oh, the disappointment! The shame! The horror!

Perhaps worst of all, I realized that if I really was the one-hit hack I feared, then I would never get the chance to prove the manager of my formerly favorite hometown bookstore wrong about me!—and I’d really been looking forward to proving her sooooo very wrong. I’d really been counting on doing that. For sure. (We really don’t need to go into the bookstore exchange, do we? We do? Sigh. Okay.)

Well, first you have to understand that during second and third grades, unbeknownst to me, my daughter, Laurel, went around at school bragging that her mother was “an author”. When I heard about this, I told Laurel she had to stop—immediately. I explained that I was, in fact, an “UNPUBLISHED author”, which in my mind, translated into “wannabe author” or, in other words, “NOT AN AUTHOR”. Laurel was very disappointed to learn that her mother was NOT AN AUTHOR.

She had to suffer this particular disappointment—and keep quiet—throughout the rest of third grade, all of fourth grade, and most of fifth grade, too. But then, at the end of her fifth grade year, I sold Something to Sing About, thereby becoming a soon-to-be published author. A real author! An author Laurel could brag about!

This resulted in a signing of sorts, but not really a signing. The bookstore never bothered to tell anyone that I would be there. They didn’t even bother telling shoppers that I was in the store, WHILE THEY WERE THERE. I did not read or speak, but simply sat behind a table, far from the kids’ section, with a stack of my kids’ books, as directed. There was no sign, nothing at all to indicate why in the world I might be doing that—even the bookstore employees ignored me entirely. It was all quite embarrassing. But since Laurel was with me for this awful, mercy-signing, I did my best, straightest sitting, and tried to mimic a mentally healthy professional writer. (Do mentally healthy writers even exist?)

When my “sitting” was over, I asked the manager of the children’s department if she might have a few minutes to chat with me, before I left the store. Well. Her shoulders slumped, she sighed a big sigh—as if I’d asked for one of her kidneys rather than five minutes of her time—and said, “I guess…if we can sit down…my feet are killing me.” I said something like, “Sure, of course, absolutely—thank you,” and followed her to some chairs.

When we were seated—and the manager had removed her high heels—I asked her how she thought things could’ve gone better, what I could’ve done differently, and if there was any chance that I could have a more traditional book signing there, IN THE CHILDREN’S SECTION OF THE BOOKSTORE.

She tried to help me—sort of. The manager said that I would be welcome to come to “local authors’ night” at the bookstore, to which all local authors were invited. She then added, “That’s all we ever do for any of our local authors—we don’t have any important authors locally.” I asked what made an author “important”. She basically said that important authors are defined by “big, important publishing houses”—citing Random House and HarperCollins—and the depths of their promotional pockets. She then ended our conversation by suggesting that I try my luck with smaller, locally-owned bookstores where I might be more welcome. Was she indicating that I wasn’t welcome here, at my favorite hometown bookstore? Maybe not. But, yes, I think she was.

Needless to say, I left what had once been my favorite bookstore in all the world with no intention of ever returning. And I chided myself inwardly for being so stupid: Here, all this time, I’d thought that writers were defined by their writing. Of course, I’d also thought that this particular bookstore was the best in the whole wide world. So, yeah, stupid me, right?

And then I thought of my parents! Augh! My parents had been at the bookstore, and they’d brought friends–all of whom bought books, by the way. My poor parents, who had worried for many years about the daughter that hoped to be a writer, but wasn’t—yet. My poor parents who’d had to suffer in silence, when their friends bragged over the successes of their own children—because I’d had no success—yet. My poor parents! Their one teensy weensy little opportunity to be proud of me had FINALLY come, and now this! How must they have felt at the bookstore? I told myself to calm down. I told myself that yes, my parents had, of course, been embarrassed—just like my daughter and I—but that they were pretty much used to being embarrassed by me at this point. So, they were probably okay.

But that night, when I went to bed, I wasn’t okay. I was still upset. I tried to untangle Laurel’s feelings and my parents’ feelings from my own feelings, and figure out just why I was so upset. Had I expected to be greeted by a parade at the bookstore? No. Had I expected people to line up for signed copies of my book? No. So, what then, had I expected, exactly? I had expected a little basic human kindness from my favorite hometown bookstore, and failing that, I had expected a little common courtesy. I went to sleep angry, and thought I had every right: Shouldn’t everyone, everywhere, be entitled to a little kindness and courtesy? YES!

When I woke up the next morning, and looked around—seeing some dust—I realized something about dust: No matter how much one cleans, dust perseveres, and left to its own devices, it grows. So, I decided I would keep persevering and growing, like dust—or a fungus. While no one was looking, I would get better and bigger and stronger, and who knows? Maybe one day Random House or HarperCollins or some other Big Important Publishing House would notice little old me. Maybe. Of course, if and when they did, I would refuse to do any signings at my formerly favorite bookstore—and I would take satisfaction in telling the bookstore precisely why I refused. Take that, Miss Haughty High Heels!

That had been the plan. Only, none of this seemed likely during my March Madness. Doubts and fears and worries itched like chiggers under my skin. I scratched. They became infected.

I went back to telling people, when asked, that I was a stay-at-home mom. Period. Which seemed to be the truth—entirely.

Honestly, the way things were going, if not for my husband and his business, I would’ve told the builder of our new house to stop building.

Also, I wasn’t sure I liked my hair. I asked my husband what he thought. He wasn’t sure he liked it either.

Of course, I knew things could’ve been worse. For example, I could’ve been in my husband’s shoes, trapped in nine square feet of space, with four moody females: 1.) A writer-wife self-loathing enough to buy into some snotty bookstore manager’s low opinion of her, yet self-aggrandizing enough to be angry about it, 2.) A very twelve-year-old girl, 3.) A cranky old dog, and 4.) An exuberant young dog that nags and makes the old dog even crankier—have I mentioned that both our dogs are female? Well, I figured my husband could always go outside and commiserate with the battered, broken trees.

And then my prayers were answered: April came.

(In the interest of fairness, I have removed all bookstore appearances from my calendar. Don’t bother asking; I won’t tell which one I am referring to here.)