You probably shouldn’t read this. I’m not feeling very fun or funny or even slightly entertaining these days. I’d pretty much decided not to blog, but then I thought my parents – and perhaps a few prison inmates – might worry and wonder what had become of me. (Thank you for your concern, parents and prison inmates.)
So here I am. With a story my husband, Mark, recently told me about his mom. (What? Mark said I could use it. Well…okay, he would’ve said I could use it… probably – dontcha think?)
Mark grew up in a military family, so he moved around a lot. The family had just moved again, when one morning, Mark, a teenager, was pulled over by the police, while driving his mom to work. Mark had never been pulled over before, had had no experience with the police whatsoever, so he was naturally nervous. When the officer arrived at Mark’s window, asking for license and registration, Mark said only, “Yes, sir.”
The officer informed Mark that he had been pulled over for not having a sticker on his license plate that was required in that particular state, but not in any other state. Mark said only, “Yes, sir.”
So, Mama Joy (his mom) leaned over Mark and began telling the officer – rather loudly – how she felt about that sticker, in light of the fact that they’d just moved. Apparently, the police officer was not in the mood for this, so while Mama Joy was talking to him, he turned on his heel and walked back to his car.
Did Mama Joy let that stop her? No, she did not. She got out of Mark’s car, walked back to the police officer’s car, and proceeded to yell at him, as he was writing Mark’s ticket. As she was yelling, the police officer rolled up his window. Did Mama Joy let that stop her? No, she did not. She began banging on the officer’s window with her fists.
At the time, as a teenager, Mark said he was beyond mortified. But as an adult, Mark says he knows exactly how that police officer felt: You didn’t want to be on the other side of the window that Mama Joy was banging her fists against – you really, really didn’t.
What I know is this: No matter which side of the window you were on, at any given moment, if Mama Joy loved you, then above all else, she loved you. Fiercely.
So, in the wake of Mama Joy’s death, I’ve decided to love a little more fiercely. I’m going to love my husband and my daughter and my sister and my nieces and all the Paynes here on earth twice as hard, for Mama Joy.
Meanwhile, I know that Mama Joy is loving fiercely – and dancing often – in heaven. 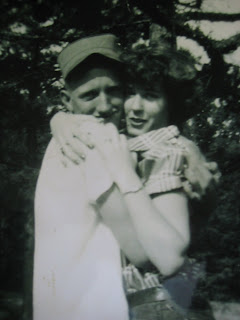 (Mark’s parents, Dean & Joyce Payne, as they were, and as I imagine them to be now.)

← Are We Still Doing This?
I Don’t Do Windows →