A call came in from my daughter’s school a couple of weeks ago while my daughter was at school. No, my daughter wasn’t sick. No, she wasn’t in any sort of trouble. No, there was no problem whatsoever. So, basically, I was tricked into answering the phone.
After The Phone Incident, I called my husband, Mark, at work.
“I just got a call from the school,” I said, and I could hear every cell in Mark’s body shifting to give me his full attention.
“Uh huh,” he said, as in, Go on. I’m listening.
For a few seconds, I thought about saying something like, Our daughter has been bitten by a rat at school. (He has a thing about rodents.) This would’ve launched Mark out of his office chair and into a seizure-like fit brought on by debilitating disgusted-ness, which would’ve lasted for at least ten minutes. What can I tell you? It’s very rare for me to have Mark’s full attention like this – and also, ours is an unusual relationship. But ultimately, I decided I didn’t have time to wait the seizure out, so I went with the truth, knowing that even though the truth wasn’t nearly as disgusting, it was almost as unbelievable.
I said, “I’ve just been put in charge of food and flowers for a banquet for 100 people, in the school cafeteria, in two weeks.”
“Oh……really?” Mark said, in a way that pretty much meant, You’ve GOT to be kidding. You? Have they met you? What could they possibly be thinking over at that school? Did all the other moms say no to this? Did they have absolutely NO OTHER CHOICE? (Now is probably a good time to mention that I’m not the most social person on the planet, that my cooking skills are minimal, and my baking skills are nonexistent. And flower arranging? Ummmm…yeah…whatever the question is, I’m pretty sure I don’t know the answer. Unless the answer is writing a check to my local florist, which I totally know how to do.)
“I know,” I told Mark. “It’s crazy.”
“Yeah,” Mark said. “You’re gonna need help.”
Let me just take a moment to point out that although my husband did recognize that I needed help (good job, honey!), he did not offer to help me in any way. Which almost caused me to say, Oh yeah, AND your daughter’s been bitten in the eye by a possibly rabid rat at school. But I didn’t. Because although very entertaining, a seizure wouldn’t actually help me, and what I needed more than anything else right now was help. Serious help. Luckily, I knew where to get it.
I immediately began contacting other moms, moms that I suspected actually had some social, cooking, baking, and flower-arranging skills, unlike moi.
A couple of moms I called pretended not to be themselves over the phone, saying, “Oh, she’s not here right now. May I take a message?”
I resisted the urge to respond by saying something like, Um, we’ve met…several times…so I recognize your voice – BUSTED! or, Do you, by any chance, suffer from multiple personality disorder? And instead, I sweetly played along, leaving a – rather lengthy – message, with the mom, for the mom. (Score! Two points in social skills! Yay, me!)
One mom, when asked to bring something for the banquet, said, “Uh…I work.”
I thought, Yeah, we ALL work, sister, but what I said was, “That’s great! Then we have something in common, because I work, too! So you’ll help me, right?”
There was a growly sound on the other end of the phone, which I interpreted as, “Right.”
But most of the moms and a few teachers (who are also moms) mounted their noble steeds and rode right in to save the day. Which is how the school cafeteria ended up being banquet-ready last night. (Perhaps you require proof – and I don’t blame you, not even a little bit.) 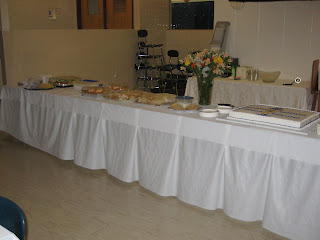 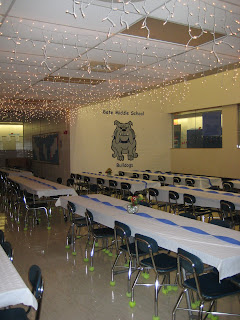 Yeah, moms ROCK. Without them, there would be no banquets, no Thanksgiving feast, no Christmas feast, no holiday parties, no twinkling holiday decorations, no gifts (okay, there might be a few gifts, but they probably wouldn’t be on time and they definitely wouldn’t be wrapped!), and no Christmas cards – not to mention no dinner and no clean laundry. So give ‘em some love, y’all.
For my part, I am, right this very moment, sending love and thanks – with my heart – to all the moms who worked to save the school banquet (from me), to my own mom and her mom, to my step-mom and her mom, and to every mom who’s ever lifted my spirit with her very mom-ness. The world would be a dreary place indeed…without moms.