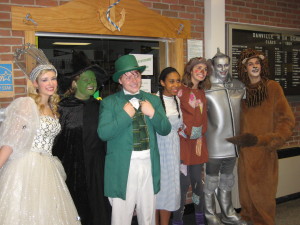 Spent a wonderful weekend following a tremendously talented cast down the yellow brick road, in The Wizard of Oz. (Our daughter played Glinda, the good witch.)

I couldn’t even look at their mamas after the show. I knew they were all sobbing and I figured that my crying right along with them wouldn’t exactly lift their spirits. I told one of the mamas—when cornered—that although her son would leave, he’d be back. She said, “Yes, but it will never be the same.” I didn’t say anything else. Mostly because I couldn’t—I was crying too hard—see? I told you.

She’s right, of course: It won’t be the same, because life is change. And faith is letting it, trusting that you’ve done what you were supposed to do, that you’re exactly where you’re supposed to be on your very own yellow brick road, that everybody else is too, and that everything’s going to be okay. I assume. Our daughter’s only a sophomore—thank God!

These are the things I will tell myself—while doing deep breathing exercises—at graduation this year. And if all else fails, I will revert to the wise words of my dad: “She isn’t dead; she’s just at college.”

is just such a librarian. From Dr. Seuss Day parades to puppet shows, she makes reading fun and exciting! Additionally, she pays close attention to her students, cares about each and every one, and actively looks for ways to help, in her own quiet way. When she noticed that one of her students was being… END_OF_DOCUMENT_TOKEN_TO_BE_REPLACED