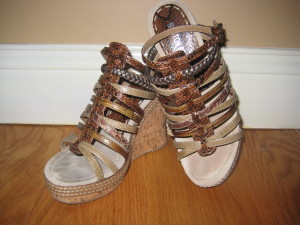 Granted, they don’t give me flying power, or zapping power, or any kind of special power. In truth, I can’t even power-WALK in them. Fortunately, they aren’t for power-walking; they’re for power-SITTING. Unfortunately, I have seriously overestimated my ability to get back to my car after I’ve done my power-sitting. Twice.

The first time, I had attended a party where I knew I’d see a beautiful friend with whom I attended middle school and high school. I felt the need to power-sit there because I’m pretty sure my friend has spent the past twenty years in a zero-gravity, zero-sunlight, space capsule, sustained by only water and lettuce, while I have spent the past twenty years on Earth, sustained by things that taste good. My friend didn’t seem to mind, probably because she was so dazzled by my power-sitting. All went well. Until I was on my way out.

By then, the sky was power-raining, so a gentleman partygoer insisted on walking me to my car, under the cover of his umbrella. I was almost there when I felt my right foot slide out from under me, through some mud. I ended up on the ground, in my dress and power-pumps, looking up through the rain at a man I deeply respect. He grinned and said, “I thought those wedgies were awfully high.” (He meant “wedges” but I have to give him credit, because I’m not sure I know another guy who could even get that close.)

So, yes, my power-pumps had failed me, but I’m a very forgiving person, which is why I gave them a second chance this week. This week, I stepped off a curb onto the street where my car was parked. My right foot landed on top of a small rock. My shoe reacted by tilting violently, in an effort to throw me off of it; my ankle twisted in a way that was all kinds of wrong, and the rest of my body followed suit, dumping a Big Gulp of Diet Coke onto my favorite dress in the process. And that, my friends, is how I ended up sprawled halfway across a street, dripping Diet Coke from my dress, and blood from my knees, elbows and hands. It could’ve been worse: There could’ve been a car coming.

So, as much as I love these shoes, they won’t be getting another chance with me. I’ve decided that I’m only qualified to do regular-sitting (and very little walking). This was a difficult decision, in which I involved my family. My daughter deliberated by trying on my power-pumps; she then shuffled along like a girl whose feet had just been bound by the Chinese. My husband deliberated by comparing his height to mine in the power-pumps, and even though he’s tall, he says he has no interest in dating a woman who clears seven-feet. So, goodbye, pretty power-pumps. I want you to know that I don’t blame you for trying to kill me. It was self-defense. You were just trying to get me off of you, because you are smallish and I am . . . NOT.  It’s all good.

And hey, if anybody out there has supremely superior walking skills, needs some power-pumps, and wears a size 7, let me know and I’ll gladly mail these pretties to you!