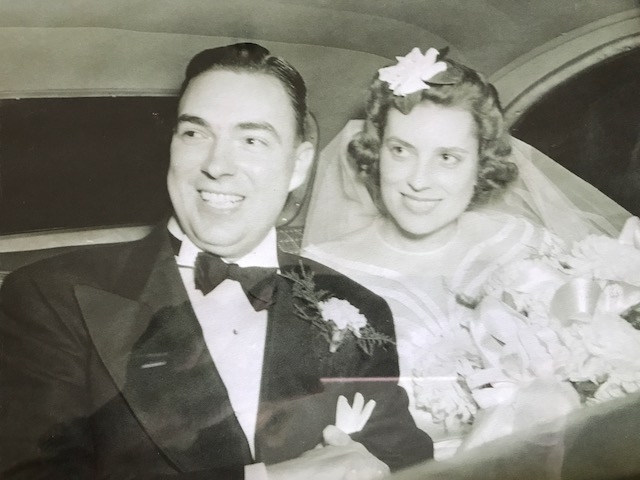 He never stopped referring to her as his “bride.”

They met when they were seven-years-old, as the top two students in their class. They were fast friends, best friends, who could be seen walking to and from school together from grade school until they graduated high school. (He always asked to see her report cards. She always said, “You show me yours first.” He did, and was still outraged well into his 80’s that she never once showed him her report card!)

He became a lawyer; she became a librarian. They were grateful to have work, glad for any opportunity to serve others—they wanted to be useful—always. He continued going in to the office every day until the day he died at the age of 91. At the age of 100, as the oldest resident in the nursing home, she continued reading aloud to other residents who’d lost their sight.

They loved Jesus, each other, their family and friends. He loved a black saddlebred horse named Lady. She loved a red Irish Setter named Rebel. They were joyful and generous and began each day saying, “This is the day that the Lord has made; let us rejoice and be glad in it!” (Psalm 118:24)

And rejoice we do, because after being separated by his death for well over a decade, Joe and Marie have finally been reunited in heaven—in her final hours, she exclaimed, “Joe!” (I imagine them as they are in the above photo, only they’re dancing!)

How blessed I was to be one of their granddaughters, to have had their beautiful example of living, loving and serving before me for my entire life. I am forever grateful.

Lynn Plourde has honored dogs—and the people who love them—in her new novel, Maxi’s Secrets (or, What You Can Learn from a Dog). I began tearing up on page 1, but the tears didn’t actually fall until page 2! That’s because we’re asked to accept a hard truth right up front: “Having Maxi in my… END_OF_DOCUMENT_TOKEN_TO_BE_REPLACED

You probably shouldn’t read this. I’m not feeling very fun or funny or even slightly entertaining these days. I’d pretty much decided not to blog, but then I thought my parents – and perhaps a few prison inmates – might worry and wonder what had become of me. (Thank you for your concern, parents and… END_OF_DOCUMENT_TOKEN_TO_BE_REPLACED