I have written many love letters to the state of Kentucky, but this one is for the city of Danville and the Danville Admirals Marching Band.

That’s because there were always plenty of parents who traveled with the marching band, and I tell you truly that I have never met a nicer, more devoted, more generous group of parents gathered together in one place. Never. These parents do everything from building props, loading, hauling and unloading said props, pulling them on and off the field before and after each performance, to washing uniforms and making sure that each kid always has plenty to eat and drink. They even provide a hot dinner for every member of the marching band whenever they can’t get home for dinner – which is often. These parents know more than just the kids’ names. They know who’s happy, who’s sad, who’s sick, and who’s hurt, and what’s more, they care. When they’ve done all they can possibly do to help, then they pray. (Two marching band moms told me that when they woke up on the morning of state semi-final competition, they lay in bed praying for every single member of the marching band by name!) 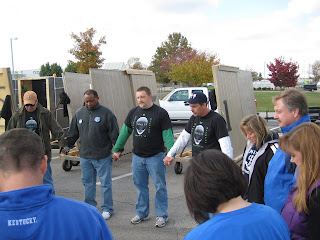 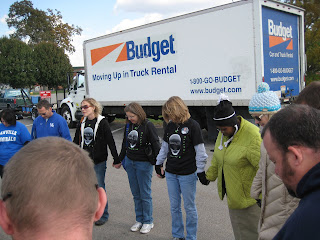 And then there’s our band director, Mr. Towns. Although I admit that discussing marching band with Mr. Towns is every bit as serious as discussing bypass surgery with a cardiologist, the bottom line is that he and his wife clearly, deeply care about these kids – in marching band and beyond. 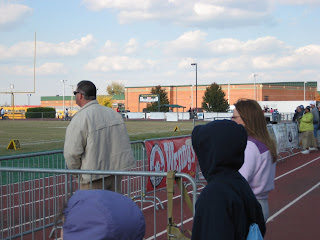 Mr. and Mrs. Towns and their two biological children watch their marching band perform – I say “biological children” because they have 42 other kids, on the field in front of them, all of whom refer to them as “Mama and Papa Towns” – they have earned these titles. Here are some of their other kids: 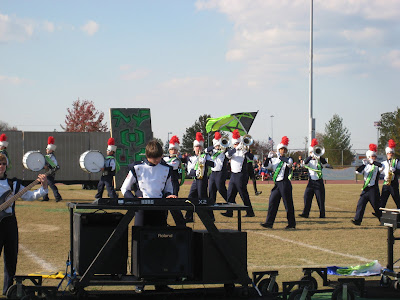 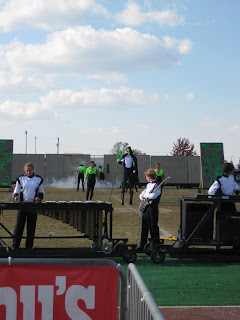 All in all, I have to say that this is an extremely disciplined, hardworking group of people, with a helluva lot of heart. And here is the moment that made it all worthwhile – for me, at least. 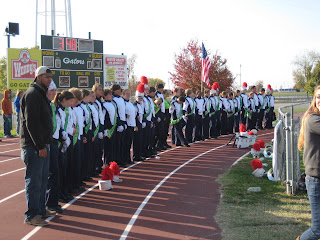 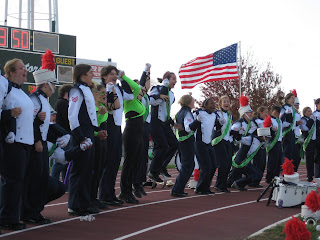 Left: Lined up to hear the bands that will advance from state semi-finals to finals. Right: Danville is announced as a finalist!

Yet, although many people in many cities could tell you how their hometown football team or basketball team did this year, very few know how their marching band did. (I am as guilty of this as the next person – I don’t even know if my high school had a marching band! – sorry, Mr. Towns!) But the people of Danville know and love their marching band. For example, when I took my daughter to the doctor last week, the doctor wished her good luck at state competition and said she really thought they might win this year.

In fact, they came in second.

But even so, as soon as the marching band bus hit town last Sunday, they were met by police cars and fire trucks and escorted (paraded) through town, with lights flashing and medals hanging out the windows of the school bus!

One teensy, tiny little drawback: On Monday, when it came time for trick-or-treating, our little Southern Belle was busy… 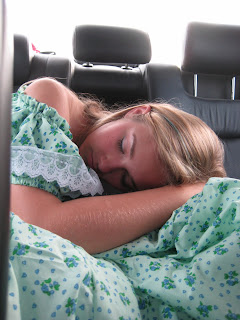 Still, I am humbled and proud and incredibly grateful to be a part of the community of Danville, to know the other marching band moms and dads, Mama and Papa Towns, and to be a marching band mom. Thank you, all of you.

And thanks to my daughter, Laurel Grace, for making it such a pleasure, such a privilege, such an honor to be your mom. 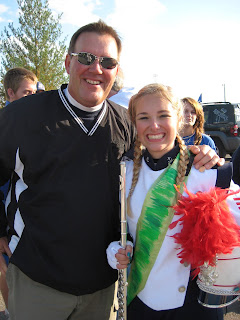 Click the link below to see The Danville Admirals Marching Band perform at Regional Competition: