Were you, by chance, at WalMart last night? Because I was, and it seemed to me that everybody else in the world was there, too. Of course, we were all there for the same reason: to buy school supplies. But since I hate all shopping and put it off as long as possible – until my family is forced to live on tap water and mustard sandwiches made with burger buns – I also needed groceries.

My daughter and I arrived at WalMart around 8:30PM. By 10:00PM, we had two carts full of stuff, and I began sending my husband cranky, I’ve-been-shopping-at-WalMart text messages, while he was out fishing with a buddy.

Here are the exact text messages that were exchanged:

Me (10:07PM): Okay, I can’t find two of the things on our list, but I’m leaving WalMart without them because if I have to stay here any longer, I’m going to start ripping out handfuls of my own hair.

Me (10:20PM): The very mature – old – man behind me, who is thirteenth in line, has begun complaining LOUDLY that WalMart should have benches for people waiting to pay. Everyone can hear him. No one is looking at him. We don’t want to encourage him, I think.

Me (10:31PM): Hey, do you think it might be Pajama Day at WalMart? I’m pretty sure the ladies in front of us are wearing pajamas. Pretty sure as in POSITIVE.

Hubby (10:32PM): Send pictures. (Apparently, my husband assumes that we are in line behind the Victoria’s Secret models, who have come straight to WalMart from their VS pajama shoot.)

(10:32PM): My daughter snaps a quick pic of the woman in front of us, who is wearing hot-pink pajamas, covered in hearts, and sends it to my husband.

Me (10:47PM): Our daughter just sat down on the floor! In WalMart!!! Apparently I completely failed in my attempt at explaining The Theory of Germs to her. Repeatedly. Don’t worry: I’m not making a scene. Yet.

Me (10:52PM): Your daughter, who is now covered in WalMart germs, just touched me! I’m trying not to freak out. Do you think WalMart sells Hazmat suits? 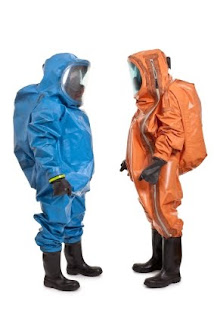 Hubby (10:54PM): My daughter? She’s MY daughter now? Me (10:55PM): We – YOUR daughter and I – are now eleventh in line because the pajama-people in front of us abandoned their cart and walked out chanting, “Kro-gers! Kro-gers! Kro-gers!”

Me (10:57PM): The WalMart workers are now walking around handing out free cookies and cupcakes from the bakery. They are saying things like, “Take as many as you want.” This is bad. This is very, very bad.

Hubby (10:58PM): You’re right. Leave your cart and run for the nearest exit. Please take my daughter with you.

Me (11:02PM): I just learned that all the computers are down, and WalMart doesn’t have a plan B. I suggested adding machines and calculators from the electronics department. They looked at me like I was an alien – and I’m not even wearing my Hazmat suit!

The computers came back up in the moments that followed – hallelujah! – and I was never in my life happier to hear the sound of barcodes being scanned. Everyone in WalMart clapped and cheered and threw their arms around one another. Really. No kidding. There was actual clapping and cheering.

My daughter and I arrived home safely, with food and school supplies, around 12:40AM. My husband generously unloaded the car and put the groceries away, while I sat in a corner hugging and rocking myself. (I have mentioned that writers aren’t exactly known for their mental health, have I not?)